Some days, I don't want to write posts. Some days, my heart is heavy and my words come out thick and I can't stop the yammering in the back of my head - the famine, the pictures on the news, the death and horror and bleakness of it all.

Hard to believe all of this is happening a plane ride away.

It's hard to know what to do.  I've been surprised by non-profit organizations before (and recommend, wholeheartedly, that you check out and see how much of your dollar actually goes to help) but I wish there was some way I could help.

Here? Today we played Trivial Pursuit,  (did you know that Iceland drinks more Coca-Cola than anywhere else, per person? I didn't!) made chicken chili mac and a giant chocolate cake, Rosey learned to skip rope and Cass discovered he just might like watching baseball after all. Tomorrow he's going to go hang out at a Pirate Festival (and so is busily practicing his arrrr!s), and Rosey is deciding where she wants to go after the library - the park or the playground.

Of course we're assuming it'll stop raining. It's supposed to, but this summer has been a little baffling in that regard. I can't remember another summer when I've been sure to have both an umbrella and a sweatshirt in the car in July.

Those seem like such small, inconsequential things compared to leaving a child to die by the side of the road and carrying a dead baby on my back, compared to the sweltering heat and the flies that are these people's daily lives.

Rosey and I were floating in the pool night before last (before all the chlorine tabs and pool-shock and whatever else that goes in there went in there) and I was trying to explain to her how if she dipped her head back and closed her eyes and just floated, how that was like my summers were like growing up, because I grew up near a lake.  And she looked right at me and said 'Awww, Mama. You never got to go to the beach?'


(Because 'beach' to her means the Atlantic.)

It's weird how different (in mostly small and indefinable ways) their growing up is than mine. I guess I never thought about how they'd grow up as salt-water kids, thousands of miles away from what I think of as home, and from another country to boot - and how alien that would make me feel. They've dipped their toes in Lake Huron on our last vacation, but have yet to see Lake Michigan - which is strange to me, as the big fierce body of water governed so much of my childhood. I'm sure I'm idolizing the bay, but there's just something about the memory of all that water and constant fresh-water breeze that makes me astonished that they don't have that as a governing thought in their bodies too. 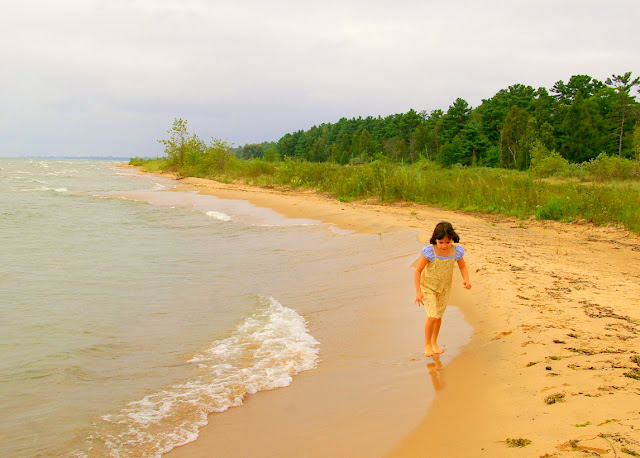 last August, on the shores of Lake Huron, in one of the tiny towns that populate the lake-side there.

A better example: last night Cass told me to shush because he wanted to hear the Pledge of Allegiance on tv. (Because he's never really heard it.) And I, of course, cannot bleat out O Canada at any time.
I'm not sure them being raised as Americans would make them any better. (I think they're pretty spectacular, after all.) This is all situational stuff.  But it's different than I thought it would be.
I wonder - do you catch yourself sometimes and think about how different than yourself your children are?
Today they're out at 'the beach', frolicking at the ocean with their beloved aunt, having a wonderful time. Soon they'll be home, sandy feet, windburned cheeks, and all, bursting with stories and adventures and pocketsfulls of treasures.
We're alike in that way. I can never leave a beach - freshwater or salt - without stuffing my pockets full of momentos either.
Hm. Maybe we're not so different after all.
at July 21, 2011 6 comments:

Email ThisBlogThis!Share to TwitterShare to FacebookShare to Pinterest
Labels: ahh the therapy bills, an american girl, crap in my head, I will live on damnit, ma famille, my life in pictures, the girl from away, this parenting crap

we have a new neighbor

We always have deer around
.
And birds.

And a few desultory porcupines, complaining their way (It's hard to be covered in spines! There's very little supportive hugging.) through the orchard.

In springtime we see turtles and hawks, eagles and monarch butterflies. Barney  (I have a suspicion he is Barney II, or at least Son of Barney by now - how long do garter snakes live?) makes an appearance every once in awhile, and gulls, terns and the odd loon show up on the river. Cormorants and even a few herons. Squirrels.

Maybe a raccoon now and then. Oh! And crows. We do see crows, and some of the biggest blue jays you've ever seen in your life.

Tonight, though, we discovered there's someone new in town. Someone we'd never met before.

(a very blurry picture of a lovely pair of wild turkeys)

She politely even brought one of her young'uns to show us as well.

They seem to be hanging out in the watershed. Maybe I'll take some grain down and scatter it.

Email ThisBlogThis!Share to TwitterShare to FacebookShare to Pinterest
Labels: 'round the neighborhood, I will live on damnit, just....wow, kinda cool, the animal kingdom

an afternoon of fortitude

Our property used to have a road running smack through part of it. A regular old country road, and people still remember driving it, how it wound around through the apple orchard and trees and gave you glimpses of the rushing river and then the woods and back again.

But that was awhile ago, and if you didn't know, you wouldn't know that cars used to vroom through the space where the deer now come out and graze. Wild strawberries and raspberry canes tangle where the old ruts used to be - the grass grows thick over the rest.

There is one, lone sentinel telephone pole left. Unattached to anything, it stands guard over a grove of pine trees and the edge of the watershed.

(Why is there a telephone pole at the edge of the field, all out by its lonesome? Because the power lines followed the roads.)

We had lots of long sticks left from different batches of wood-cutting and tree-thinning and the over-zealous beaver we had visiting us last spring and so this afternoon, after I got home from work and the cries of 'play with me!' started, the kids and I

the kids and I built a teepee.

It's big enough so they can both get in it and stand up. 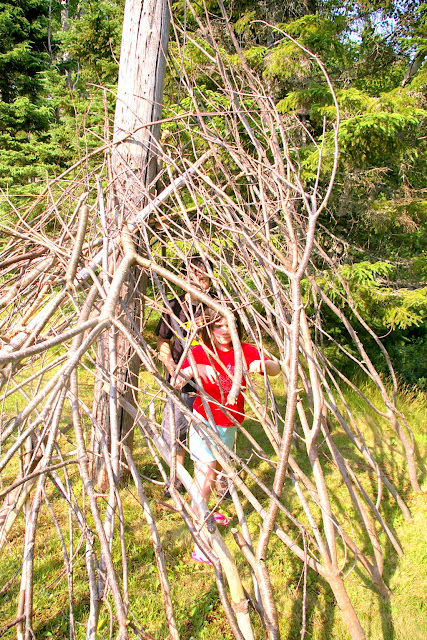 They're pretty chuffed. Big plans of sleeping out overnight once we're finished (I want to take vines and weave them through, then toss on a couple of old sheets to cover it all.) and games of fort have already started. The doorway is on the other side, in an area shaded by pine branches, so the entrance isn't obvious.

Email ThisBlogThis!Share to TwitterShare to FacebookShare to Pinterest
Labels: I will live on damnit, kinda cool, ma famille, my life in pictures, what's going on in the world today

Holy crap, you guys. The chemical makeup of chloroform is easy.* Kinda puts a whole 'nother spin on the Casey Anthony trial. 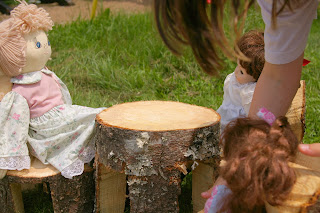 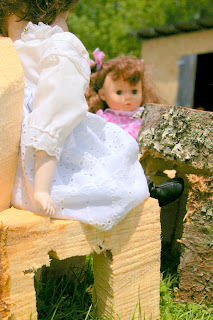 B has been making Rosey some doll furniture out of stumps lately - he's been watching a video on chainsaw carving and started off making her some little doll chairs and a table, where her dolls have been enjoying many tea parties and get-togethers lately.
I know it's not very clear, but the back of the chairs are heart shaped. 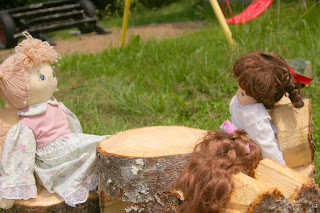 It's his first attempt and R is thrilled. It's nice, sitting at the computer and hearing her murmur to them in the side-yard.

Much better than hearing her talk on the phone to her boyfriend.
(I cringe. And will maybe tell you the story later.)

But for now.....I'm going to take some strawberries out to her little bistro table.  I think those dolls might like a little treat.

Email ThisBlogThis!Share to TwitterShare to FacebookShare to Pinterest
Labels: 'round the neighborhood, my girl Rosey, my life in pictures, wait - is this supposed to happen already?
Newer Posts Older Posts Home
Subscribe to: Posts (Atom)