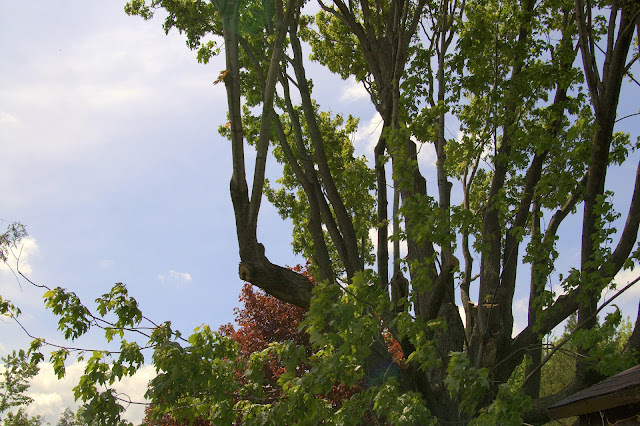 It lives in my father's backyard, back beyond the fence near the pool, near the garage, a cornerstone of the backyard. It watches over the house and the fields and empty barn across the road and sees whatever buzzes by on the county road.

The feeders are nearby, so the tree is usually filled with birds and squirrels, flitting about or caging a seed here or there. Woodpeckers briefly alight, then fly off to softer wood with better rewards. Last year the tree was so full and bushy branches had to be lopped off.

It looked sad and uncomfortable before all this spring rain, but now all the leaves have joyously unfurled and it sings in the breeze and celebrates itself.

Email ThisBlogThis!Share to TwitterShare to FacebookShare to Pinterest
Labels: my life in pictures, the girl from away, visiting

Scene: I am on the computer. It has been a verah long day. Bear is watching hockey? something? on tv. The children are upstairs, supposedly getting ready for bed. In reality, this means they're irritating the hell out of each other and trying to make each others lives generally miserable.

I tend to ignore it until it reaches shouting level and I have to go do something about it.

Suddenly, into my quiet evening floats the sound of my much-beloved son's voice.
'Piss off, Rosey. Out of my room!'

My eyebrows climb into my hair. My jaw drops. I wheel around and stare incredulously at B, who is staring right back at me.

There's a small pause. Then Bear shrugs. "Why are you looking at me like that? I don't say that."

(Bonus points for using it correctly, but still.....)

Email ThisBlogThis!Share to TwitterShare to FacebookShare to Pinterest
Labels: 'cause I'm the Cass-man, 'round the neighborhood, a strange thing happened today on my way to..., ahh the therapy bills, this parenting crap

Swallowed-down rage in a senior citizen trapped in an airplane on a runway to nowhere smells like cantaloupe, wicked and musky.

The pilot was just admitting even he didn't know why we were still on the ground when she turned to me. 'This,' she intoned, knobby fingers flying with the injustice of it all, 'is intolerable. They act as though we are not human.'

I agreed. We were crammed into a small jet, every seat full, most people hunched in their seats to avoid the low headroom, afraid to fully extend their legs because they might launch the poor fellow sitting in the row in front of them into the seat in front of him (and so on - a domino effect of claiming your rightful space) breathing stale air, and since this was to have been a 'quick' flight, the flight attendant wasn't even bringing the drinks cart around. The idea that we were chickens crammed in a box ready to be taken to market began to take root in my head.

Rose, in the seat next to me, had been on plane after plane today (she was flying back from Italy) and was resolute and pale with the grimness of it all. She was quiet except for a few squawks, exchanging gripes with her friends, her head darting back and forth from where I sat, curving my spine to see out of the window.

Honestly. What good is a window that is placed at chest height? And I'd like to suggest to the airplane industry that they remember that North America is getting fatter and taller, and stop with making the legroom and headroom smaller and smaller, and narrowing the seats. Because if airplane travel is not convienent (which, with the full body scans, the charging for any checked baggage, the ridiculous ticket prices, and the general don't-mess-with-me mentality that 99% of the airport staff have, it's NOT) and it's not fast (over an HOUR and a quarter spent baking on the tarmac at JFK. No official word why.) and it's not comfortable, then why in hell aren't we all taking the train?

Email ThisBlogThis!Share to TwitterShare to FacebookShare to Pinterest
Labels: a strange thing happened today on my way to..., an american girl, it's ponderous man just ponderous

it's all gone green

Yes, it's Spring. (And I hear you, wondering why on earth I'm talking about this now, I mean, isn't it Spring EVERYWHERE?)

But the sad truth is that in NS it's been pissing down rain for a week and today we finally saw the sun and....

And it was GOOD.

Email ThisBlogThis!Share to TwitterShare to FacebookShare to Pinterest
Labels: 'round the neighborhood, graces in small things, hurrah 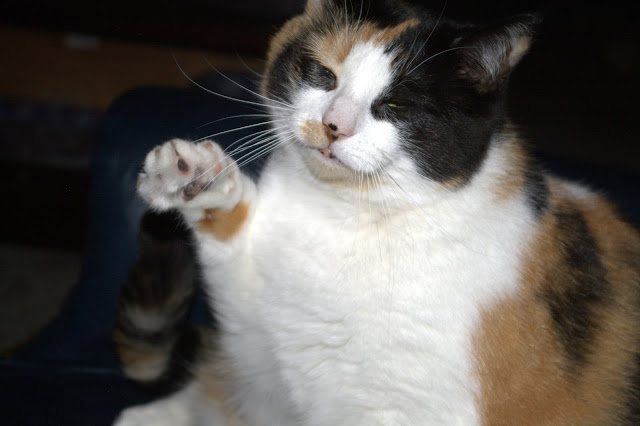 (said in your best Joey Tribbiani voice, of course!!!)

This has been both a cheese-grinder and a low, slow easy morning.

Lovely because there was sleeping in and johnny-cakes and fresh coffee sweetened with maple syrup and hard, fingernails on the edge hard because of a homework packet that Rosey tra-la-la'd her way into my bed with.

Math and trying to teach checking your work to someone who would (to be fair) reeeeally rather be hugging the cat too hard is sorta......difficult.

I'm beginning to see why so many of the kitchen table sessions I remember with my parents were excruciating.  (That said, I STILL remember most of the sneaky number tricks that you taught me, Dad. Even thought I bitched A LOT while you were going over [and over, and over] them with me.)

But now even the horror of realizing Rosey learns just like me (oh, I weep, I wail)  is fading when faced with a new book and a weekend of doing nothing but what I want to do.
at May 14, 2011 No comments:

Email ThisBlogThis!Share to TwitterShare to FacebookShare to Pinterest
Labels: 'round the neighborhood, ahh the therapy bills, as time goes by, ma famille, remembering, school daze 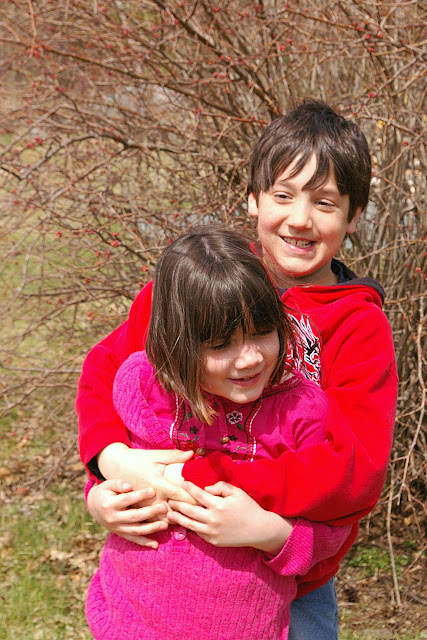 Because you both make me laugh. Every day.
You drive me crazy, too, but I think it's part of the Kid Manual that you do that. You are stubborn and sweet, achingly tender and outrageously catty, and either one of you can wind the other up in a heartbeat.
(That does get a little tiring, actually. Just an observation.)
You're loyal to a fault and smart and compassionate, with great big hearts
that you use to teach me new things all the time.
I love being around you. Thanks for being my kids and calling me Mom.
at May 08, 2011 2 comments: