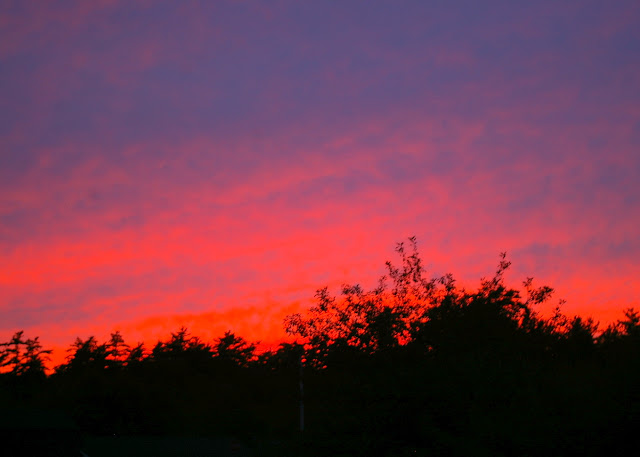 I was cleaning the bathroom tonight and found, coiled in one of the wooden cigar boxes that hold my mothers jewelry, something I haven't seen in years. Something that I'm so glad I have of hers. I can still remember how it looked against her neck.

It started out as bracelets. Charm bracelets. Someone - Mom? - put them together and created a necklace, a chunky, fun piece that she wore with many different things. There were charms bracelets filled with charms from Grandma Gebhart (my great-grandmother) my grandmother, my great-aunt, my mom, and a small, uncluttered piece that held the few I remember from trips we took when I was small. A silver horse and carriage from Mackinac Island. A tiny flag from the Bahamas. A hoop-skirted belle from My Old Kentucky Home.

My great-aunt Alberta had great charms - even a tiny silver cocktail shaker that when pressed, opens and a little devil head pops out. (Bertie lived through Prohibition.) There is a wee class ring from my mother's alma mater on her string, and my grandmother has a fantastic spinning top. I love telling the stories to Rosey and wondering with her about the ones we don't know.

There are a lot I'll never know about, since both Mom and Bertie are both gone.

Tonight, though, is no time for being wistful for the past. Tonight is also eleven years since I took Bear's (slightly damp) paw and promised to love and cherish him. So I have some celebrating to do!

Email ThisBlogThis!Share to TwitterShare to FacebookShare to Pinterest
Labels: as time goes by, ma famille, my life in pictures, remembering, things I brought with me, whats going on in the world today, when a man loves a woman

Go here to see how Energizer and Evergreen are teaming up to make our world a better, more sustainable place.
at September 21, 2011 No comments:

slipping in the snark

It's hazy out here, where I've been lately.  The weather is foul, murky-green shot through with bilious colours, and the footing is decidedly treacherous. If you ignore both the pond-stink of old water and whatever that was that just went squirming and shrieking off through the underbrush, it still looks sorta normal.

We bloggers get invested in each other. Hazard of the beast, really, when talking about our lives and families and children and carpool and work and work again. Then Facebook came along and catapulted us all into each other's laps, and I now know more about people I've never 'met' than some of the ones I've lived near for a decade now.

What do you do when you realize that someone you've looked up to isn't who you think they are? Someone who you've read for a few years, whose stories you've looked forward to and whose children you can call by name?

What do you do when the mask cracks and falls away and what you see beneath takes your breath away with revulsion - all the pretty stories sworn up and down to be truth exposed and crumbling in daylight, groups and websites sprung up to hammer home the point that you've believed a lie, a lie with a wide colourful bow, yes, but still a lie - what do you do?

I kind of wish I still was clueless. Because now? I gaze at my family in the light of the waning sun and know that I've lost something through this revelation, that the blogging community for me will never be the same again.

I mourn, yes.
And then I turn my back on the toad squatting in front of me and look towards the sun, clear at last.

**This has been bubbling for awhile, but I need to get it out and on the page before it festered from simple grief, disbelief and pity to hate**
at September 20, 2011 8 comments:

Email ThisBlogThis!Share to TwitterShare to FacebookShare to Pinterest
Labels: at least that's over, games people play, it's ponderous man just ponderous, out on the tundra, people piss me off, unsettled, will this never stop??

Surprise! We adopted the kittehs. (You never saw it coming, did you?) They had their booster shots yesterday (and a feline leukemia test and a squirt of revolution) and were perfectly behaved, and now they're officially part of the family.

They're lovely and playful and fierce hunters of toes and a lot of fun. They spend less and less time under things (Jasper still freaks them out a bit) and more and more time with their motors running full-throttle, being petted and flopping with all feet in the air for belly rubs. Wish I was that comfortable with people! (Well, maybe not. I think rubbing my belly might be a definite mood-breaker during committee meetings.)

They've also taken over the sunny windowsills in the living room (Fine, huffs Lucy, lashing her tail, I'll go out to the one in the kitchen) and do a fine job of napping, little bodies all wound up together like a jigsaw.

Now we need to figure out the great de-clawing question. But that can probably wait for a bit. 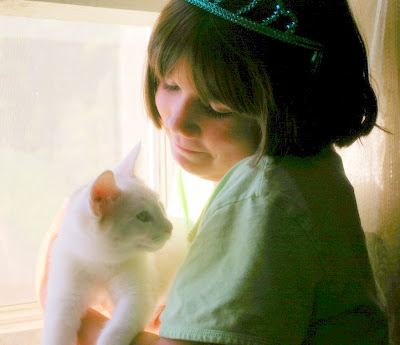 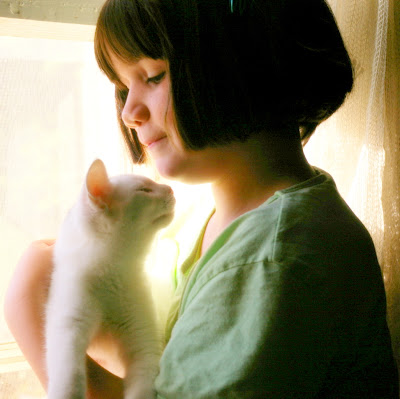 Email ThisBlogThis!Share to TwitterShare to FacebookShare to Pinterest
Labels: a strange thing happened today on my way to..., my life in pictures, round the neighborhood, the animal kingdom, the critters, whats going on in the world today

Boy, things are quiet here when the kids are gone! B and I just rattle around...

The two are having their last adventure of the summer - a weekend at a cabin on a lake with fun aunt, smores, and no parental supervison. and I'm trying to keep B from going dotty over the fosters.

It's not easy. Just look at the wee faces! 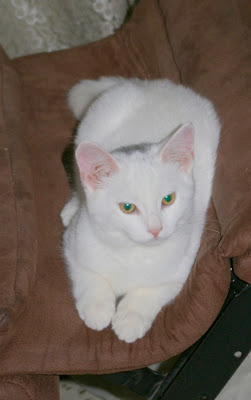 This is Cirrus. (But we call her Boo.) 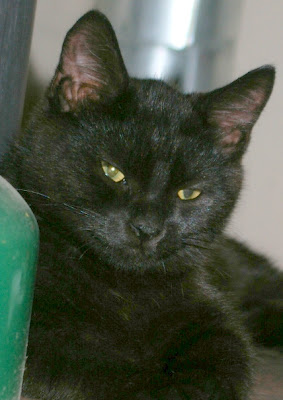 And the handsome fella is Nimbus (but he's Inky 'round here*.)

And Bear is a big puddle of goo over both of them. We're fostering them, I say, but I'm beginning to think I'm speaking a language he doesn't understand.

Lucy is aghast that they're still here and mutters quietly while giving them a wide berth. Since they spend their sleeping time under the couch and she prefers the luxury of a whole! kid's! bed! to herself! they haven't met much. She's not actively hostile - I predict that will come when they wend their way upstairs and flounce into the above-mentioned kid's room - but with them losing timidity by the day it seems soon Lucy will have to lay down her paw and assert herself.

I haven't had wee kittens like this (and they're three and a half month old, not teeny things) in years. They are awfully cute.  And sweet. And one of them licked Bear's foot today.


*The kids were all hot to name them. Great! Go for it! Then Cass rattled off a list of Greek gods and Rosey decided the boy should be named Sparkles.

Perseus and Sparkles. I figured the first chance they got they'd pull a MacGyver, slit a windowscreen and thumb their way back to town. Nope. So a couple of easy names (for the foster kitties, the ones we're not keeping) were decided upon.

Email ThisBlogThis!Share to TwitterShare to FacebookShare to Pinterest
Labels: hedging my bets, my life in pictures, there be a b'ar in them woods, what's going on in the world today

We have been watching the sofa intently for the last few hours, with breaks to go jiggle toys behind the couch and shake treat bags.

They were found in a port town near here, and were not socialized as tinies, and it shows.  They came today from a foster home where they learned to trust enough to jump up in people's laps and be petted, but tonight is a whole new ballgame and they've been using the underside of the couch as homebase. Now that things have quieted down (I sent the kids to bed - of course, they're back down here now, but it's calm at least) they've been weaving in and out around the floor and taking tiny bites of food.  In the last half an hour they've progressed to jumping on the couch and checking out the windowsill, and I'm sure they'll be in the litterbox tonight.

Lucy is decidedly unimpressed but we expected there would be a few days of outraged shrieking before the order of things is settled.

They were named for clouds when they came. The girl is white with a grey smudge on top of her head, and her brother is coal black with flashy gold eyes.

I say we're fostering (it's something I believe in whole-heartedly) but I've got a sneaking suspicion that while I went over and over the concept with Rosey and Cass until they understood that these kitties were temporary, I was having the conversation with the wrong person.

Yep. Bear might be a problem. He's been the one most actively gathering them up and ooh-ing and aah-ing over how little they are, how sweet, how their purrs are so loud....

('Course, now I'm remembering when Lucy came to stay, and how she picked Bear out within hours of her arrival, and sealed the deal with a big rumble purr and a lick on the cheek.)

And, of course (no fool them) they've been turning their volume controls up, cuddling, playing when he tosses the toy, etc.

I'll try to get some pictures soon as they don't run when they see me coming. But the house feels good tonight, warm and full.

Email ThisBlogThis!Share to TwitterShare to FacebookShare to Pinterest
Labels: 'round the neighborhood, the animal kingdom, the critters, what's going on in the world today
Newer Posts Older Posts Home
Subscribe to: Posts (Atom)