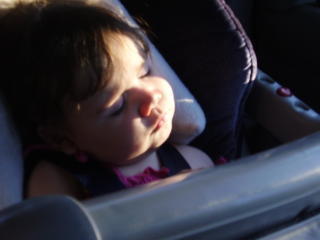 Tonight I heard gunshots - so close they rattled the windows - and rushing to the windows to see if some idiot was actually thinking he could shoot the deer in our apple orchard, I saw the light pole at the corner of our property going crazy. It flashed lightning a few times (the sodium light exploded) and made these horrendous cracking noises, and, of course, huge plumes of black smoke. I dialed 9-1-1 and explained to the RCMP dispatch that answered that I wasn't really sure what was going on but that things were definately hinkey. She dialed the people who page out the fire/first responders around here, and I got to have the exact same conversation with him.(If this were a life-and-death situation, wouldn't this be a huge waste of time??) I was staring out the window the whole time, making sure this big ball of flame didn't appear out of nowhere and sweep towards my house, and I saw a couple of cars turn in to the fire hall. So I told him 'Look, there are a few firemen there already, do you want me to just run over and talk to them?' He laughed a little and said 'Actually, I have the (Small town) Fire Department on the other line.' At which point I blurted (because I am famous for saying things like this) 'Well, then, I guess you don't need me, do you?' and hung up. So now I have a pole with scorch marks, and three firemen sitting in their cars, watching to make sure nothing happens where they need to get out the beeg trucks.

I found out later it was 'just' a transformer, and that NS Power will come out tomorrow.

Note to self: Throw out the cordless phones. Six firemen showed up at the firehall tonight before it was paged out....many, many people have police scanners around here, and I'm not always polite when I talk on the telephone.

Here's Casserole on one of the firetrucks the other day... 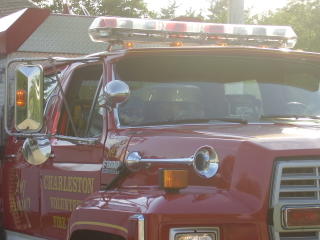 Bear is a volunteer on the department and takes the trucks out sometimes to give them a run, much to the The Boy's glee...
at July 24, 2005 No comments:

Email ThisBlogThis!Share to TwitterShare to FacebookShare to Pinterest
Labels: 'round the neighborhood, a strange thing happened today on my way to...

A mermaid, she isn't. 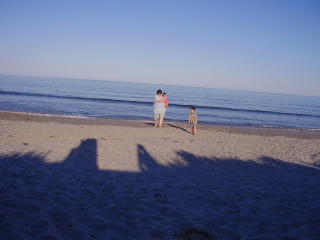 Rosey's first dip in the ocean! And it was low tide, and the sand and the beach went on for miles, and the sky and waves were this gorgeous blue color, and the water was freeze-your-ass-off-cold. And she hated it.

Cass, of course, since he is part fish, loved being in the water. And of course, getting all wet and shrieking wasn't nearly as fun as going in deeper when Mommy came to get him. (And I think I mentioned this, but the water was so cold it hurt.)

As a total aside, I used to be amazed that people here lived by the **ocean** and completely took it for granted. Now I know why - it's too frigid to swim in!! It's like the cooler at the end of the party...

By the end of the night, Cass was a big, sandy, one-reason-away-from-falling-apart ball of tiredness, and Rosey was clinging like a limpet to both Dh and I - I suspect she thought we were going to set her down and leave her there.

Photos courtesy of Bear, who never seems to use the zoom function on the cameras.... 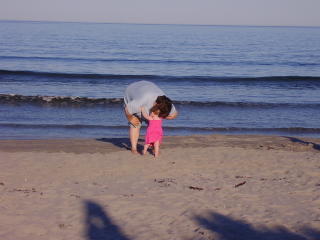 It is hotter than a quarterback's armpit right now, and it's midnight. The kidlets are lying still to conserve bodily moisture and the cats are waiting for me to go to bed so they can take their fur off and parade around.

Dh is downstairs, watching television (some old corny movie) and drinking Diet Pepsi. I want to know when he'll be bringing my mojito up....or at least some iced tea.

Remember when you were little and on the very hottest day the Coke would freeze your brain? Your hand would go sort of numb from the coldness of the can and you'd have to switch your grip on it. Why can't things be that cold now, when I'm all grown up and melting??
at July 19, 2005 No comments:

Email ThisBlogThis!Share to TwitterShare to FacebookShare to Pinterest
Labels: 'round the neighborhood

He can camp! She can crawl!

Cass is camping in the wilds of one of the local parks with my SIL and her husband, and the house feels so lonely and dark without him. He left Sunday and he'll be home either Tuesday night or Wednesday morning - I'm sure he'll be sunburnt, hugely dirty, and bug-bitten, talking six hundred miles a minute and drop-dead tired. I love this age - he's excited about everything he does, thinks, sees, or hears.

Rosey and I hung out today and she crawled a bit, just to show off. She's a master at the commando crawl, using her forearms and toes to get where she wants, (and can that girl ever move!)but today she finally decided that hey! Crawling on my hands and knees might be fun. So she did.
at July 12, 2005 No comments:

Email ThisBlogThis!Share to TwitterShare to FacebookShare to Pinterest
Labels: 'cause I'm the Cass-man, my girl Rosey, wait - is this supposed to happen already?

I don't want to re-stir the ashes of a fight I wasn't involved with, but:

I read a lot of blogs. There are some very funny, wise and wonderful people out there writing, and I'm lucky to be able to grab ahold of their lives, if only for a short while. They make me think and laugh and weep. Some of those blogs are women with small children. Since I have an ankle-biter or two myself, I can relate.

All well and good, right? So, you're thinking, ho-hum, what is the point??

One of these women had a post on her blog about letting her baby cry it out. She's a first time Mom, and was having some guilt issues about doing that - I wrote back to her and shared a story about my experience with CIO (Worked with my son, my daughter the diva, no dice) then watched in horror as her post was completely mistrued and comment after comment poured in about how terrible she was, what a monster, etc.
People posted comments about her blog on others' blogs, and the venom (and incorrect statements!) went on and on.

My question:
How can we, as women, as mothers, be so horrible to each other?
Noone's parenting style or choices make you a better parent, it's just the road you choose. Isn't it time for some solidarity between women? Some helping, instead of righteous name-calling? Some acknowledgement that we're all in this together, and working as hard as we can to help our kids become great adults?

Email ThisBlogThis!Share to TwitterShare to FacebookShare to Pinterest
Labels: what's going on in the world today

In which I notice I need upkeep

My sister in law (the younger one) stopped by last night to tell me she got a teaching position close to home - that means she'll be able to live in the house she bought last year, instead of commuting home on weekends. She's my age but still single and fancy-free - I looked at her last night, her cute shoes and pedicured feet and hair done perfectly and just had this almost physical reaction. Inside me there was a big ol'cry of "I used to be you! Where am I, and who the hell is this woman sitting here with baby spit on her shoulder, with broken nails and in desperate need of a haircut!" Then I realized the awful truth...the slob who smelled like baby barf was me.

So happy for her good fortune. So plotting for a few days to myself.

Email ThisBlogThis!Share to TwitterShare to FacebookShare to Pinterest
Labels: crap in my head, pay no attention to the man behind the curtain

the eating of big boy 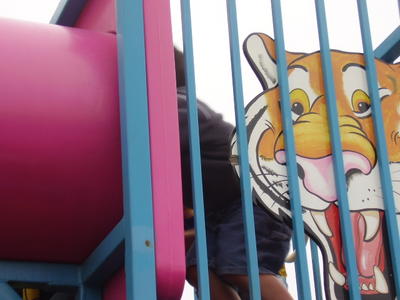 My favorite pic of Casserole at the carnival yesterday - the tiger looks happy to get a bite of smallboyflesh, doesn't he??
at July 04, 2005 No comments:

Mommy I want to go to the carnivore!

Spent the day at the carnival. Casserole loved it. We bought him an armband so he could ride as many times as he'd like and he was off to the races. I think the carny people deliberately put the little kid rides on opposite ends of the space so the wee ones will get tired of chugging back and forth. It worked...but only after a few hours! He rode the motorcycles (the updated version of a carousel, blah) a bajillion times and the Gator ride (mini roller coaster) a hundred times.

And after all the manners we've taught him (the ones he's really pretty good at using!!) he decided that he had to ride in the first cart of the Gator, bowled over two small girls and dove, headfirst, into the seat. The operator had to lift him out and help him get re-settled. I was too busy giggling to help at all, watching his little feet wave around.

He had a hot dog and a soda, then decided once we left that nothing would do but he have a chocolate chunk cookie. (I'm telling you, kid after my own heart.) So Mommy got to indulge herself too and get an iced cappucino - thank God for Tim Horton's.

Now he's sleeping the sleep of the truly exhausted. Tonight my father in law and my husband will take him up to see the fireworks. I plan to put the Rosebud to bed and read a good book. Maybe some ice cream?? Now that's the way to spend a summer's night.
at July 03, 2005 No comments: