dear people, I am insane

To which I snort Christ.

I need a year to get ready for Christmas, and I never seem to find one. Oh, I start out the year with plans! Big plans! Plans about how this year I will buy only meaningful things! We will give more, spend less! This year will be the one my children have less under the tree, but more in our hearts!

And while we're doing more as a family and being careful to be more in the moment, do you know what I did? I went on Chapters last night and bought not only a paper electric guitar (I have no idea either) but an accordian. For a child.

Add to the usual holiday psychological mish-mash the fact that beginning next week, I will be unemployed, and you begin to see why an accordian seemed like such a good idea last night. I'm out of my mind.

(Unemployment short version, minus the wailing and knashing of teeth: Agency re-structuring and not renewing my position. They gave me a month's notice. I bear them no ill will.)

But it doesn't do much to lessen stress levels. Or obviously, my insanity threshold.
Step away from the Chapters website, Jess.....
at November 30, 2010 9 comments:

Brought to mind by Kyran

What? You don't still have a pile of candy? You must not have a nine-year old who is OBSESSED with making it last until Christmas.

No, the costumes. Oy, the COSTUMES.

Between work and life and the crazed-errand-running soft shoe shuffle a few days before Halloween, I had an epiphany.
An epiphany, right there in the middle of the costume aisle.

We had PLENTY of costumes already. They were all in the dress-up box. So, I bustled home and grandly (and not at all nastily) told the kids that this was the last year I was going to buy costumes.

You would have thought I had declared that this year we would be collecting candy for the express purpose of throwing it in the mud and then feeding it to the dog. There was a bit of self-righteous snorting. There may have been some weeping.

But I held firm. After all, part of the fun of Halloween was creating a costume!

Cass had changed his mind, again, and now wanted to be a zombie. So off I went to the internet (god bless the internet) to learn how to do zombie makeup. He was mollified when I promised him he'd look cool.

R wanted to be a witch, with the regulation black dress and hat - but not an evil witch, a good witch. Hmm. 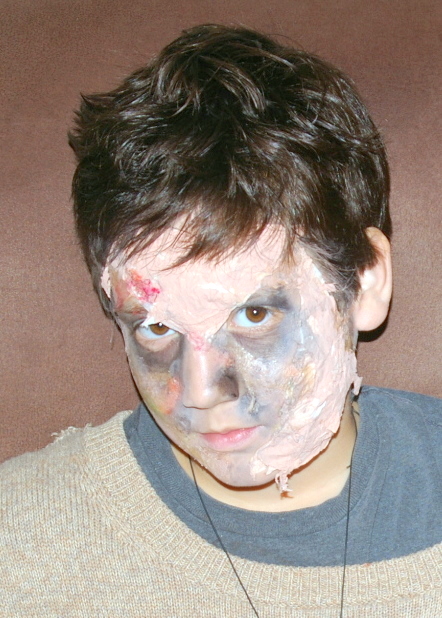 I think it worked out well. 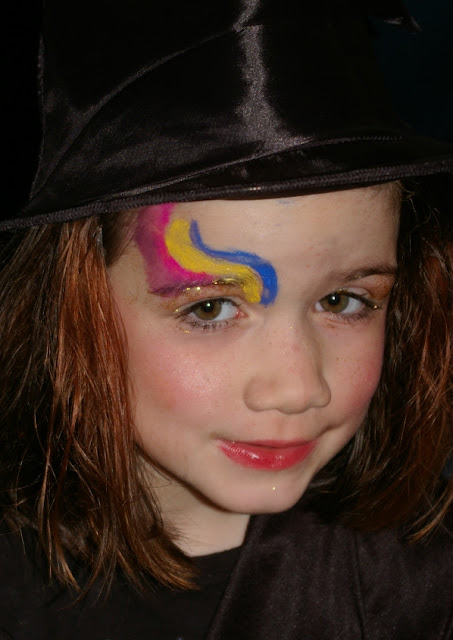 He looked rotten - and rotted! - and old. Several adults took a step back when he showed up on their doorstep and I think he enjoyed that the most of all.


And we added sparkly makeup to Rosey's all black get-up and she was sufficiently not-evil enough to suit her.
So, Halloween was great! Loads of candy, they walked all over and got tired and noone threw up this year (yay!) and I'd told them we were making the costumes next year and noone's face fell off from horrified disgust and well, that was fun, 'cause it's over.
So! To recap: Made the costumes this year, even though I had told the kids we'd buy them this year, make them next year.  Even got their acknowledgements that their friends thought the costumes were cool.
I was pretty darned pleased with myself.
Of course, last week I totally wasn't thinking when I threw a 70% off pirate sword and an 85% off goth-fairy set (wee black wings, headband, wand) into my shopping cart.
I blame the Halloween candy withdrawal.
at November 18, 2010 8 comments:

Email ThisBlogThis!Share to TwitterShare to FacebookShare to Pinterest
Labels: hee hee hee, it's ponderous man just ponderous, my life in pictures, the aftermath, this parenting crap, what's going on in the world today

I have a lot of food links.

I like food, you see, like creating new recipes and old cookbooks and figuring out the kids' latest favourite thing and eating, my god, can't forget eating and planning a grocery list (altho' not so much the actual shopping) and trying to re-create experiments and remembering suppers gone by.

(I mean, holiday suppers. I don't moon around thinking of last Thursday's corn pudding and sighing.)

I am lucky enough to have found some great food bloggers and to have several sites that send me new recipes to try. And I do, really, but there are some things that I just cannot make, no matter how easy they are. Things that would never get eaten.

There should be a sub-set on many recipe sites:
Food that may taste good, but your kids? Are nevah, nevah gonna let any of this pass their lips. Good luck on that one.

Can someone tell me what would possess a person to name a pasta salad "Fruity Pasta Swiss Salad"? Or tout Eggplant Roll-ups as a family favorite? Put zucchinni on a grilled cheese sandwich. Or even use marshmallow in a main dish. Italian Marshmallow Chicken, anyone?

Trying to get my kids to eat that would be an exercise in futility. I can pick my own battles, thank you. And frankly, I'd rather deal with the tried-and-true narrowed-eye suddenly suspicious 'Do I smell onions?' than to break new ground with those horrors.

My kids have had all types of different foods. Some they even liked! And we never stop trying new things. Some recipes, though, are just not worth the trouble.

a house on the lake 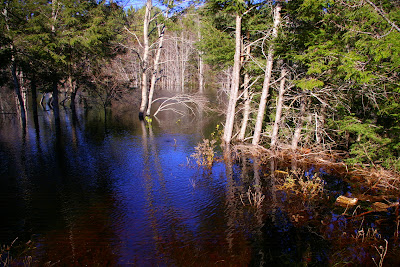 We've been having a bit of a water problem around here lately.


It's going down now - thank goodness - but it's been a scary week. Down the road each way are small* bridges, which were both closed when the water began to lick at their foundations. The big bridge across the river here was slated to be closed (leaving us unable to leave the house) so I did a flying trip to rustle the children out of school and buy a few jugs of spring water in the village, and then we hunkered down. We had water in the basement, yes, but we had power and lights and heat and a couple of sump pumps. And if you didn't look outside at the way the back and side yards were disappearing under water, it was fine. We would be on an island! It would be an adventure.

It was a lot easier to maintain the cheery wartime spirit during the daylight hours. And when it wasn't pissing-down raining.

Monday and Tuesday, we were using our old pump, which decided to sputter and die at about three in the morning. Wednesday morning we flew like the hounds of hell were behind us and rented a big gas pump. When we returned, the basement lake was deepening. This was rapidly becoming not-fun. And it was raining. Again.

Last night, though, was crisp and cold and clear and if you pretended the flashing yellow lights of the Ground Search and Rescue truck were stars it was a lovely night.

This morning the water had dropped an inch. And the sun came out. This afternoon, the kids and I watched the side yard began to reappear and the driveway to heave itself out of the muck. We found pieces of wood that had washed downstream - heavy, waterlogged things - and Cass and Rosey lugged them around, enjoying the squelch under their boots, the sun lighting up their faces and lifting the stress and worry of the flood away from their small shoulders.

Bear has been awesome through all this - watching the water levels, manning the pumps, pumping out the neighbor's basement, checking and rechecking and positioning and calling neighbors and keeping the house warm...and by Wednesday, he was exhausted. Today, he finally had four straight hours of sleep and stopped listing gently into doorways and walls. Tonight, he'll watch the water levels and adjust the pump as it needs it so I can sleep (I work tomorrow) and then it'll be my turn Friday night. (he works Saturday.) It's not an exaggeration to say that without everything he's done, we would not have been able to stay in our house.Yes, I married a rock star.


So while the back yard is still gone (see photo above - the edge of the watershed is on the other SIDE of the foreground trees) we....are....relieved.

And enjoying, sort of, the memory of the week we owned a house on the lake.


*last three pictures, this post. The bridge at the other end of the road is much the same.
at November 11, 2010 5 comments:

Email ThisBlogThis!Share to TwitterShare to FacebookShare to Pinterest
Labels: 'round the neighborhood, at least that's over, ma famille, my life in pictures, the aftermath, there be a b'ar in them woods, what's going on in the world today

It's been raining here. For the last four days.

And not gentle rain, either - this is pelt-your-face angry rain, the kind that makes the trees unsteady and leaves the mud to suck at your shoes. Dent the lawn with footprints kind of rain.

Have I mentioned before that I live between a watershed and a river?

So far, the sump pumps are doing their job, but it's a bit disconcerting to see the yard disappearing. And the ducks cavorting through what were flowerbeds. (hee! I originally typed 'fowlerbeds' - appropriate!)

The rain is supposed to continue until Thursday. We're all going to be prune-y and weather-spotted by then, methinks.
at November 08, 2010 3 comments: