i miss my yesterdays

This is hard, you guys.

In sixth grade, I switched schools. The friends I made that year have stuck with me - through high school. college and boyfriends and husbands and lives. Even though we don't talk all the time, (and I live 1500 miles away, so there aren't any coffee dates) there is Facebook and email and the phone.

I miss them, my gang.

I moved three hours north of my hometown, and one of my friends (M) came with me. We were roommates for three years. I couldn't imagine my relationship with her ever changing - I thought we'd always be in each others' lives, giggling and carrying on and poking old men with our canes at the nursing home.

But then I met Bear, and married Bear, and moved,(1500 miles this time) and we started to get distant. She was still in single-girl mode, while I had an infant and a husband and new priorities, new horizons. We were still friends, but it started to get quieter.

The last time we talked I was pregnant with Rosey. She was dating a man that wanted all her attention, and didn't like her on the phone with her far-flung friend so much, and so the phone calls just....petered out.

Yes, she realized he was an asshole. But by then I was in the midst of new-baby hell and -

And then it was five years later.

Last week I got a phone call from her older brother. M's Mom had died, and when the brother got there, he realized M was acting funny. My brave, sweet, funnier-than-anyone friend M is in the hospital right now, and no one knows what's going to happen next.

It seems her liver is not well. Why doesn't matter so much (and I think for her privacy I'm not putting that out there) but it will be a long, hard road back

And she's lost time. M thinks we're all in high school. She speaks slowly, and it's obviously an effort, but her voice is peppered with references of a time when I worked at an outlet mall and went dancing on the weekends.

When I lived close, and could bring her dessert, like she asked me to tonight.

This is really, really hard.

Because she sounded exactly like the M I remember, the one I hung out with and giggled with and talked about our dreams and hopes and that cute guy in the nice car that winked at me and I never, ever thought I'd hear that again.

It makes me want to rage, that I've found my friend again and might lose her forever.

Email ThisBlogThis!Share to TwitterShare to FacebookShare to Pinterest
Labels: an american girl, as time goes by, remembering, unsettled, what's going on in the world today

I went back to work this week.

I've been working part-time (very part-time) all along but this is the first I've worked full-time since before Miss Rosey was born.

And while it feels awesome! and very grown-up! and it's nice to talk to adults all day! and do things! That aren't necessarily kid-related! it feels STRANGE to leave the household in Bear's (admittedly capable) hands.

Now he's making supper, getting the kids off to school and making them do their homework at night, listening to stories about their days and doling out snacks. Yesterday he mixed up a batch of bread dough for me, had supper waiting in the pot when I got home, and had done a load of laundry and washed the dishes.

It was nice (heaven!) to come home to but it felt...odd, you know? To walk in and hear that the homework was done and here-have-your-supper and realize that another adult had very competently taken over my mom and homemaker duties. Odd...and displaced.

Yes, I know that I'm special to my kids, and that no one can take my place in their hearts. This post isn't about that. It's about feeling maybe that the world isn't going to stop if I'm not in the house, or if I'm not the one serving up snacks and stories, and how that makes me feel.

Smaller, a bit, and glad that they're with someone who loves them so much, and still....a bit displaced.


(Note: This is a three-month term position which may or may not be extended. Hats off (really, I mean that) to moms and dads and single parents everywhere who do this full-time, all the time.)
at March 23, 2010 10 comments:

hot, and can handle a chain saw and a french stitch

There were a lot of windblown giggles when I got home from work, and ruddy cheeks from being outdoors.

Daddy, Rosey told me excitedly, had made them all pants. In fact, he'd made me a pair too.


I narrowed my eyes at B, remembering him waiting impatiently in his boxers as I sewed a button on his pants.
I thought you were cutting wood today?
He grinned. 'I did.'

But then he'd gotten tired of just cutting firewood, and then he........

he made us all pants. 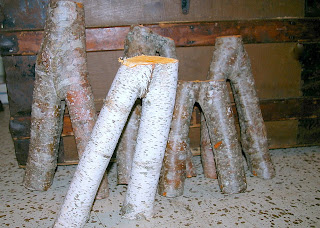 Email ThisBlogThis!Share to TwitterShare to FacebookShare to Pinterest
Labels: 'round the neighborhood, ma famille, my life in pictures, there be a b'ar in them woods, when a man loves a woman

not even batting an eye any more

There is a strange female voice coming from the living room.

'Ears what's holdin' her back, Miss!

Today was a day where spring just seemed to be around the corner. Sure, there was still some snow, but it was broken up by mud and places where you could see the ground, and the wind blew sweet and crisp.

C and R ran about, finding new places in the forest to explore and heaving rocks into the pond. 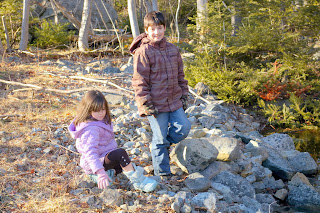 It's nice to have them back on their feet.Coughs here or there, and they still get winded easily, but tomorrow - after two weeks home from school, they should be headed back.

Well, he will. About 4 pm Rosey burst into tears and began yelping that her ear hurt. I've never seen her so inconsolable. Hands fluttering at her ear and twitching so she couldn't lay still,  she batted off our hands and shrieked away ear drops. So off to Outpatients we went, R hiccoughing that she only wanted a girl doctor and not at all pleased when I said she'd have to see whomever was on call.

We saw one of the younger doctors up at the hospital, and some very kind and caring nurses, and came back home,clutching a purple freezie with cotton balls* in her ear, still unhappy but not in such pain. A red and swollen eardrum is not a happy thing. Now she's passed out, and we'll see how she's feeling tomorrow. Frankly, I'd love to see her go back - I know she misses her friends and the teachers and the structure of school, but obviously, if she's still in pain? She'll have to wait.

Email ThisBlogThis!Share to TwitterShare to FacebookShare to Pinterest
Labels: my girl Rosey, my life in pictures, out on the tundra, school daze, sickies, this parenting crap

dear people, I am grumpy again

part one of the whole grumpy mess can be found here

We got it. Canada won the big hockey game! Wahoo! Now STOP playing the commercials of the Olympics.
Please.
Everyone KNOWS whose game it is they're playing now.
Have a Coke and a smile my hind end,
Jess

For the LOVE OF CHRIST, LEAVE MY FAMILY ALONE. Or at LEAST stop piggy-backing one another. Can I please get them healthy in-between attacks??

Soon I'll be erecting giant swags of bunting warning everyone that we are PARIAHS and MUST BE AVOIDED.
cough cough cough wheeze cough,
Jess

I had a fever-dream about THOSE PANTS. Y'all are nice eye-candy, but I could DO WITHOUT THE HARLEQUIN PRINT seared into my brain..
Du er søt, uansett hva du slitasje.
(wink)
A fan


Dear March -
I know it's only the second day. But so far, you kinda suck.
Just putting you on report.

I could probably quit you and not look back, y'know,
Jess

Dear Husband -
Beloved as you may be, asking me if I gave the girl Tylenol when I've been up with her since yesterday is NOT conducive to a harmonious morning. Of COURSE I would have given her Tylenol - if she just hadn't thrown up a dose of cough medicine and two sips of Power Drink.
I may just leave you to figure this out by yourself.
Enjoy that white shirt while you can,
Your loving wife (who has a hot date with a cool pillow)
at March 02, 2010 7 comments: